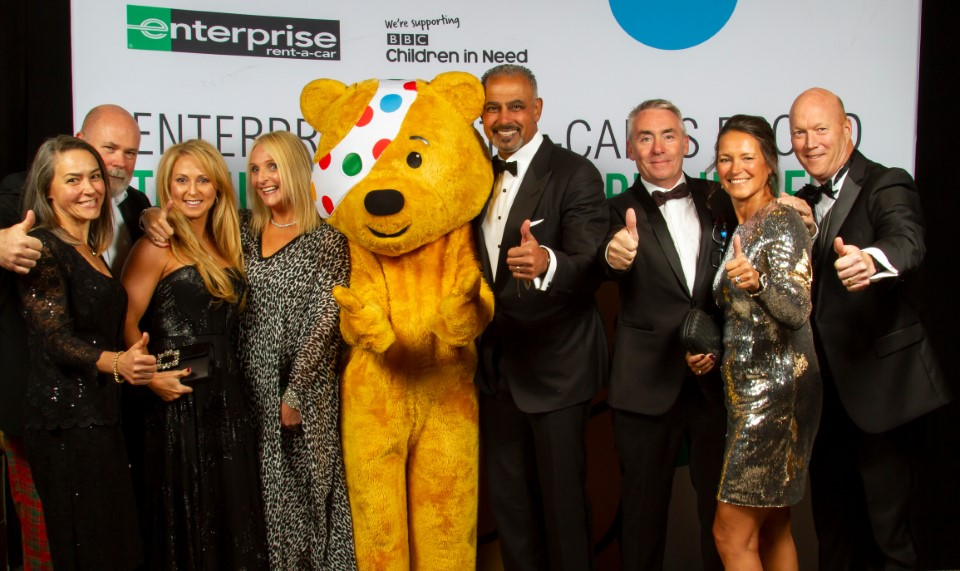 Skydives, bungee jumps and mountain treks – our employees rallied together to fundraise (in some unique ways!) for BBC Children in Need as a way to mark Enterprise’s 25th year operating in the country. Fundraising feats like this don’t happen without dedicated coordination; Customer Service Coordinator, Simon, is the passion behind the purpose and one contributing factor to Enterprise’s record-breaking donation.

Simon joined Enterprise in 2016 starting in the West Midlands before moving to the Customer Contact Centre team in Aldershot, England in September 2017. He was immediately struck by Enterprise’s commitment to strengthening communities and wanted to find a way to support that value. He knew just where to start. Simon was introduced to the charity ‘BBC Children in Need’ as a teenager when he got a job with the BBC working on the production of the Annual Telethon: “I got to witness where the money was going firsthand working on the appeal videos for the show,” he says, “and I was hooked.”

A history of helping

In Simon’s first year with Enterprise, he discovered that the organisation supported BBC Children in Need, with the team raising £9,000 – about the same amount as previous years. Simon wondered whether Enterprise could do more if he helped coordinate the effort. He was given the chance to do that, with the support and guidance of Jim Stoeppler, Vice President of European Brand Marketing. In 2017, Simon began gathering a national team of employee volunteer leaders and asked each location to nominate a Pudsey representative (Pudsey Bear is the Children in Need mascot). Simon’s team helps with ideas for fundraising and other logistics working with the Pudsey Reps to support them driving fundraising in their respective regions. In its first year, the national effort raised £92,000 through local efforts like bake sales, car washes and appeals to clients and vendors. Even with such great success, Simon set his sights to do even more for the charity.

As Enterprise approached its 25th anniversary in September 2019, Simon proposed a larger effort. He asked Khaled Shahbo, Senior Vice President of the U.K. and Ireland, for support to mark the anniversary with a £250,000 fundraising goal. Khaled agreed, and Team Pudsey was off and running. Teams nationwide jumped right in to plan their own efforts. For example:

• Employees from the East Midlands/East Anglia took on a treacherous 50km trek on Mont Blanc and raised £22,000.
• A team from the West Midlands raised about £6,000 from generous sponsors for a 100-mile cycling course from Birmingham to Egham.
• One Contact Centre employee raised £700 completely on her own. She asked family, friends and colleagues to sponsor her for a first-time skydive.
• European HQ employees took part in Race to the King, a two-day 53-mile marathon.
• Others raised money through activities such as daring bungee jumps, car washes, merchandise sales and bake sales.

In another standout fundraiser, more than 540 people attended the campaign’s biggest single event. Led by Simon, a gala dinner at London’s Natural History Museum in October raised nearly £319,000. Comedian and impressionist Rory Bremner hosted, and Thomas Forrester from BBC’s Bargain Hunt led an auction. The evening began with the arrival of a brand-new Aston Martin DB11 from Enterprise’s Exotic Cars Collection filled to the brim with Pudsey Bears! Guests included employees, family members, business partners who all got dolled up in formal wear to bring awareness and funds to the charity’s mission: to ensure every child in the U.K. has a childhood which is safe, happy, secure and allows them the chance to reach their full potential.

In the end, the teams more than doubled their £250,000 goal, raising a grand total of £590,000 including a donation of £100,000 from the Enterprise Holdings Foundation. “We’ve had teams pushing themselves to the limit to raise money for Children in Need this year,” says Khaled. “Everyone has found a way to get involved. We’d like to thank the team for going above and beyond, and everyone who has donated to help us raise such a remarkable sum for a very worthwhile cause.” This success has inspired the national team to set even bigger goals for next year. In 2019, they added a new platform that allows giving via text and creates leader boards that help branches compete. Next year, they hope to connect even more in-house teams and business areas to get them involved with fundraising efforts. Simon says this year’s effort is a true display of Enterprise employees’ commitment to the company and giving back to the communities in which they live and work. “Giving isn’t about just handing out a cheque,” he says, “It’s about ethical giving and making sure financial support gets to the right organisation in the right way. I’m so proud to work for Enterprise and immensely grateful for the entire team’s efforts to help BBC Children in Need.”

If you would like to join a global company committed to supporting the local communities view our opportunities now.