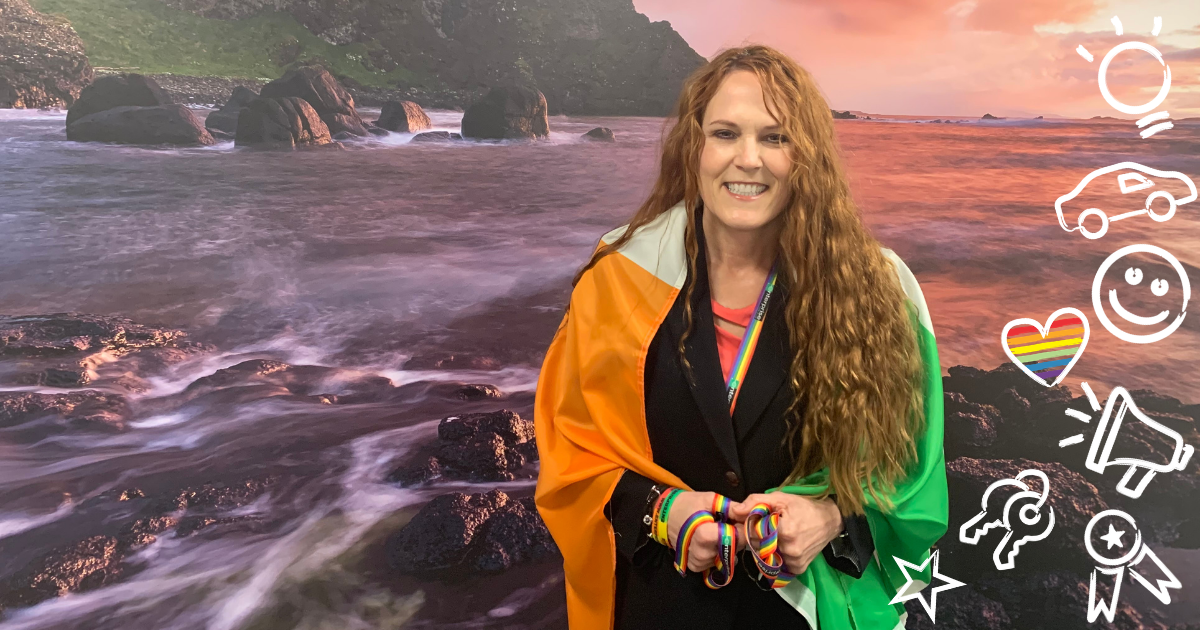 We celebrate the differences that make us unique all year long, but Pride Month is a chance to highlight colleagues who are members and allies of the LGBTQ+ community.

Leslee, our HR Manager in Ireland, is a proud ally and shares her belief that LGBTQ+ inclusion should not be the ideal but the norm:

Tell us about your career journey at Enterprise

I started my career as a Management Trainee in Virginia, USA where I graduated from University with a BA in English Literature. After achieving my first promotion to Management Assistant, at 9 months, I relocated to San Francisco where I worked at the San Francisco Airport. Within three weeks I was promoted to my first Assistant Manager role in Redwood City, CA and about five months later I was promoted to Branch Manager in San Bruno, CA. Early on I had great success in improving our branch operations and I grew our fleet by 30% at the San Bruno Branch; within a year I was promoted to the role of Corporate Accounts Manager – a position I held for about a year and where I was ranked in the Top 10 across the company. I was then promoted to Area Manager, where I was responsible for managing multiple locations, a position which I held for five years until I had an opportunity to interview for a Recruiting Manager role. After working in that role for a little over two years I was then promoted to HR Manager for Ireland and have held that position since 2007.

Throughout my career with Enterprise, I have often had the opportunity to advocate for people from diverse, unique and even marginalised backgrounds but never more so than in my role as Group HR Manager. It is an opportunity that I often seek out and always embrace and one that is born from my family influences, my life experiences and is deeply embedded in my personal values and belief system.

What has been your experience with colleagues, superiors, role models or allies as an LGBTQ+ employee at Enterprise?

While I am not a member of the LGBTQ+ community, I am an ally. This stems from my life experiences of having LGBTQ+ family members and also close colleagues throughout my working life at Enterprise. From my perspective, having LGBTQ+ friends and family is nothing short of ‘normal’. It is mainstream to me and that is how I view LGBTQ+ inclusion: simply that it should not be the ideal but the norm.

What has surprised or amazed you most about the support Enterprise LBTQ+ colleagues receive?

To be honest, I don’t find myself surprised by LGBTQ+ inclusion at Enterprise because I have a long history now with the organisation and have seen first-hand how we truly embrace those differences that make us unique. What does surprise me is when I meet peers from other organisations who are just beginning their journey of inclusion. I am genuinely perplexed when they are in the unenviable position of not having senior management or stakeholder buy into something so fundamental and central to our ethos at Enterprise. I feel quite fortunate to be in a position of always being asked by my senior leaders to do more, give more, challenge more and simply be better! Enterprise can never ask too much of its employees when it comes to achieving a culture of equity and inclusion. I feel very fortunate to be part of that community of thought leaders.

What does Pride month mean to you?

In 2015, the Republic of Ireland became the very first country in the world to amend its constitution by referendum to permit marriage between two persons without distinction of gender. The Irish People returned in their droves from the four corners of the world to cast their ballot in this critical referendum for equality and justice in Ireland – a country that only decriminalised homosexuality on 24th June 1993. I have never been prouder of the Ireland Nation that I have adopted as my own than I was on that day. Pride month for me means people coming together with conviction to deliver a collective and resounding ‘no’ to those who would continue to undermine and subvert the principles of justice, equality and basic human rights.

Want to work in a company where every single employee is treated with respect and valued for their individuality and performance? Search for our latest graduate jobs and internship opportunities in your area and see where your career could take you.


“I struggled at times to hear other people. I di

Armando L. is proud of the vibrant culture of El S

"I come from one of the most dangerous communities

You may hear successful people talk about an “a-

Today marks the start of Black History Month. This